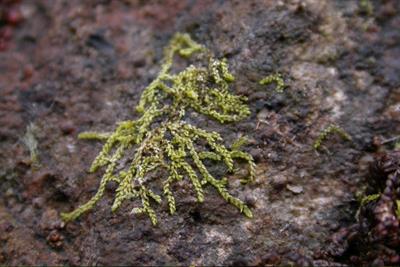 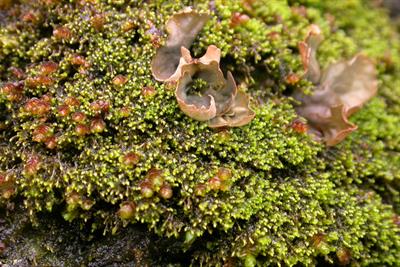 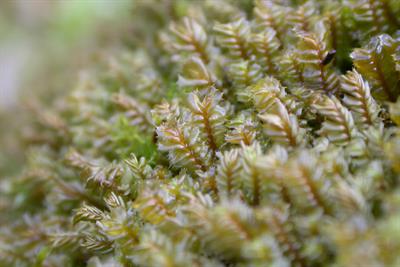 Bryophytes include mosses and liverworts and a closely-related group known as hornworts. They are typically green, usually small, and are amongst the simplest of land-dwelling plants. For example, they do not produce flowers or seeds, spreading as spores, asexual buds or plant fragments, and most have no internal means of carrying water or nutrients. They have no roots but have very thin root-like structures (rhizoids) which they use to attach to surfaces and absorb water. Bryophytes generally require damp conditions, but a number have evolved to inhabit extremely dry habitats. They occur in a wide variety of habitats, including woodlands, bogs, fens, upland flushes, in water, on riverbanks, at the edge of ponds, lakes and reservoirs, rock, walls, mine spoils, even on tarmac and in the cracks of paving stones. They are colonisers of bare soil and rock and help other species gain a foothold. Not only are they fascinating to study and beautiful to look at, bryophytes are important for ecosystem functioning and provide benefits to society. For example, sphagnum moss is a major component of peat bogs and can hold as much as twenty-times its own weight in water and is a useful component in flood alleviation. Peat bogs also lock-up large amounts of carbon and help combat climate change.

Bryophytes are well represented with 811 (73%) of the 1110 British species found in Wales. The ground layer of Atlantic oak and ash woods in Wales is rich in bryophytes including greater fork-moss (Dicranum majus), little shaggy-moss (Rhytidiadelphus loreus) and prickly featherwort (Plagiochila spinulosa) and, in the most humid places, an array of tiny liverworts such as toothed pouncewort (Drepanolejeunea hamatifolia) and petty featherwort (Plagiochila exigua). Welsh thread-moss (Bryum gemmiparum) is now extremely rare in Wales and is confined to sunny rock outcrops in the upper/middle River Usk. Petalwort (Petalophyllum ralfsii) is a liverwort found in the wet hollows of shell-rich sand dunes and Wales is a UK stronghold for this species. The liverworts greater copperwort (Cephaloziella nicholsonii) and lesser copperwort (Cephaloziella massalongi) are a link to our industrial past and occur in the old copper-mining regions of north-west Wales. Wales’s limestone supports Levier’s beardless-moss (Weissia levieri) and long-leaved tail-moss (Anomodon longifolius), both of which are known from fewer than five British sites, whilst acid rocks in Snowdonia hold orange bow-moss (Dicranodontium asperulum). Bog pawwort (Barbilophozia kunzeana) and Baltic bog-moss (Sphagnum balticum) grow in wetlands, and rigid apple-moss (Bartramia stricta) has its only UK site on droughted volcanic rocks in Radnorshire.

With such a large proportion of British bryophytes found in Wales, we have a special responsibility to conserve them. 52 bryophyte species and 1 assemblage appear on the Section 7 list, which is a list of species of principal importance in Wales. Threats to bryophyte conservation include habitat loss, climate change, inappropriate forestry management, the spread of rhododendron, the draining of peat bogs, road and housing developments, and air pollution. A Bryophyte Red Data List for Wales has been produced by Plantlife to help improve our knowledge of the threats facing bryophytes and provide data to support conservation initiatives. 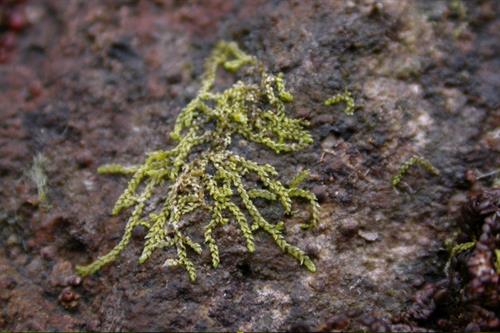 Lesser copperwort (Cephaloziella massalongi) is known in Britain from a handful of disused copper mines in north Wales and Cornwall. In 2011, most Welsh records dated from the 1960s or earlier, and there was concern that the species might be restricted to just one or two remaining localities in Snowdonia. A survey of historic sites funded by Snowdonia National Park Authority confirmed the continued presence of lesser copperwort at 4 sites where it had not been seen for decades, and also included examination of the heavy metal profile of the rock and spoil on which the copperwort grows.

This information allows assessment of the importance of individual sites for the continuing survival of lesser copperwort in Wales, has informed the design of a ditch-blocking project on Hermon Copper Bog SSSI, and allows the identification of areas where heavy metal pollution control can be carried out in a way that will enhance the population of the rare liverwort whilst also improving water quality.