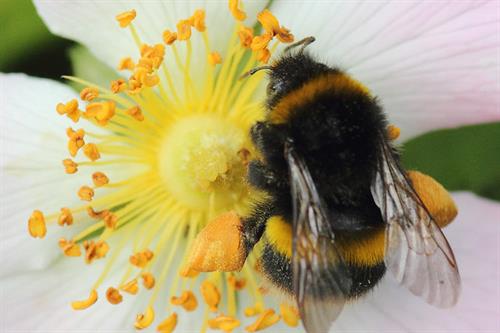 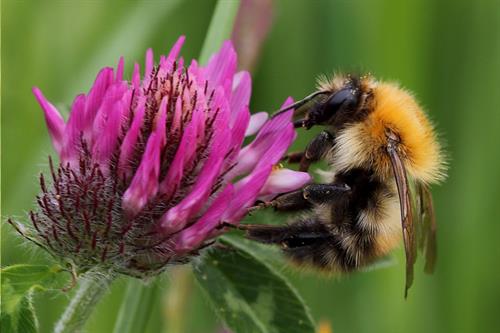 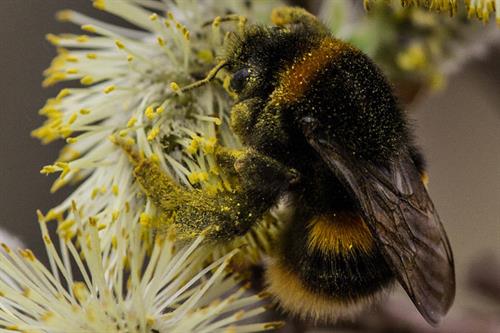 Bumblebees are endearing and familiar insects. Their animated behaviour and deep buzz as they fly from flower to flower makes them a delight to watch.

Sadly though, our bumblebees have been declining because of changes in agricultural practises that have largely removed flowers from the landscape, leaving the bumblebees with little to feed upon. Most UK species have declined greatly in recent years, and two have become extinct in the UK since 1940.

Bumblebees belong to the order ‘Hymenoptera’ which includes Bees, Wasps, Ants, Sawflies. There are distinct differences between the appearance and lives of bumblebees, honeybees and solitary bees. Bumblebees are larger and hairier than honeybees and solitary bees, which makes them perfectly suited for colder climates. Bumblebee nests are small and they do not store large quantities of honey, so they are more sensitive to the availability of pollen and nectar-rich flowers to feed on. Bumblebees do not swarm and are not aggressive. Only female bumblebees can sting and they will only do so if they feel very threatened.

Bumblebees play a vitally important role which we shouldn’t take for granted. On top of pollinating a wide range of wild plants across the landscape, they also pollinate the crops that provide us with food to eat. Without their pollination service, many wildflowers could disappear. Key ingredients from our diets, such as beans, peas, raspberries and tomatoes would be harder to produce and much more expensive without British bumblebees

Where do bumblebees occur?

There are around 250 species of bumblebee in the world, and most of these are found in the northern hemisphere, although South America has a few native species, and New Zealand has some which were introduced from Britain.

Two species of bumblebee have become nationally extinct in the last 100 years. In the same period, a new species, the Tree bumblebee, colonised the UK from Europe. The UK therefore has 24 resident bumblebee species, and BBCT are working on a project to reintroduce one of the extinct species, the Short-haired bumblebee.

Only eight species are commonly found in most places. Bumblebees are found in a variety of habitats and most people should be able to attract them to their gardens if they have the right kinds of flowering plants.

Some species are less common and are only found in a few locations. For example, the Shrill carder bee, which is now only found in seven areas in southern England and Wales. This species previously had a wide distribution throughout the south of the UK, but habitat degradation has seen its numbers decline dramatically in most places.

The Bumblebee Conservation Trust and many other organisations in Wales and across the UK are working hard to increase habitat for bumblebees. The Trust aims to increase the number of flower-rich grasslands in areas where there are rare bumblebees such as the Shrill carder bee and to improve our knowledge of bumblebee distribution and abundance through our national monitoring scheme, Beewalk.

Bumblebee-related conservation projects in Wales include:

Bees for Everyone 2011-2014: funded by the National Lottery Heritage Fund and Natural Resources Wales. The core themes of Learning, Engagement and Action underpinned this UK-wide project. In Wales the Bumblebee Conservation Trust, in partnership with landowners and other organisations, provided habitat advice & guidance for over 40 sites covering more than 17,000 hectares. Bees-for-Everyone.pdf (bumblebeeconservation.org)

Calon Wen: Pastures for Pollinators 2018-2021: Working with members of the Calon Wen Milk Co-operative, this project aims to investigate the benefits to pollinators, in particular bumblebees, of herbal leys and species-rich pastures. The project hopes to demonstrate how simple changes to grassland management can support pollinator communities without sacrificing farm productivity. Calon Wen Pastures For Pollinators - Bumblebee Conservation Trust

Skills for Bees Wales 2021-2024: Funded by the Moondance Foundation, this project aims to increase the understanding of bumblebees’ distribution and abundance across Wales.To do this, we will provide training and ongoing support in bumblebee identification and surveying & recording methods, alongside desktop studie identifying priority areas for rare bee surveys.The end goal is a network of empowered volunteers across Wales, submitting bumblebee sighting data to BeeWalk and other recording schemes. Skills for bees - Bumblebee Conservation Trust

British gardens cover more than 1 million acres and can be a lifeline for bumblebees. No matter how small your garden, you can help by providing lots of bee-friendly, nectar- and pollen-rich flowers throughout the year. Whether you have a window box, an allotment or garden, planting bee-friendly flowers can help boost your local bumblebee population. In return, they will pollinate our flowers, crops, fruit and vegetables. The Bumblebee Conservation Trust offers lots of advice on planting flowers for bumblebees – have a look at Gardening advice - Bumblebee Conservation Trust. Also try out the Bee Kind interactive tool to see how bee-friendly your garden is, and to receive guidance on the best flowers to plant to make your garden even better!

In the 1900s, the Shrill carder bee was seen throughout most of England and Wales. Since then, the populations have declined quickly, and nowadays we only have about 7 separate populations left. These remaining populations are mostly in south Wales and England, where it still thrives on meadows and flower-rich grassland. Having such isolated populations is not ideal because it can cause inbreeding amongst closely related bees, so we are working with landowners to try to create more habitat that will protect existing populations and link them up.

Bumblebees are social insects and live in nests of up to 400 individuals. Each nest is ruled by a queen

and lasts for just one year. This is different to honeybee hives which remain active for several years. 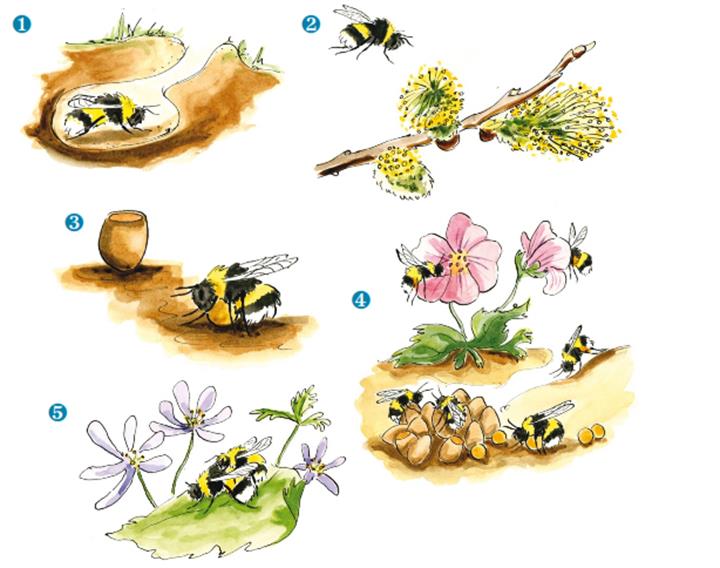 Image and text courtesy of BBCT