Dragonflies and damselflies belong to the order of insects called Odonata, meaning ‘toothed jaws’. They are a very ancient group of four-winged insects and their ancestors were flying 320 million years ago, with wingspans of 75cm for the largest species. They need water to complete their lifecycle – habitats include ponds, lakes, streams, rivers, bog pools, and flushes and runnels in heathland.

Dragonflies are known as Anisoptera, meaning ‘different wings’, and Damselflies as Zygoptera, meaning ‘paired wings’. Dragonflies (Anisoptera) usually hold their wings apart when they are resting and their eyes meet in the middle. Their fore and hind wings are different shapes. Damseflies are generally smaller than dragonflies and are weaker fliers. They hold their wings together when they are resting and their eyes are spaced apart on either side of the head. Their fore and hind wings are the same shape. There are a few exceptions to these rules. There are just under 6,000 species of dragonflies and damselflies worldwide but only 45 of these occur in the UK. Rather confusingly, in the English language dragonflies and damselflies are collectively termed ‘Dragonflies’.

Dragonfly and Damselfly Species in Wales 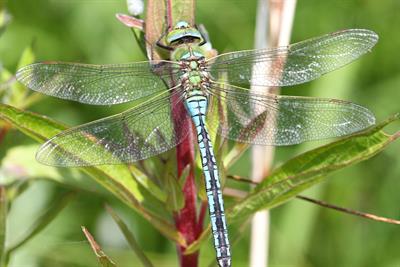 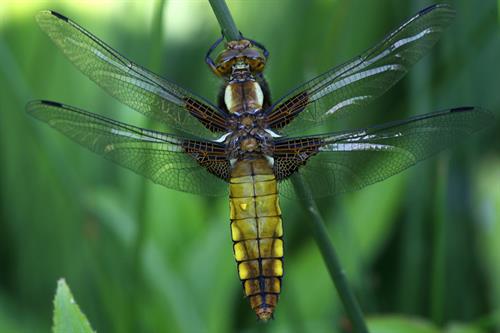 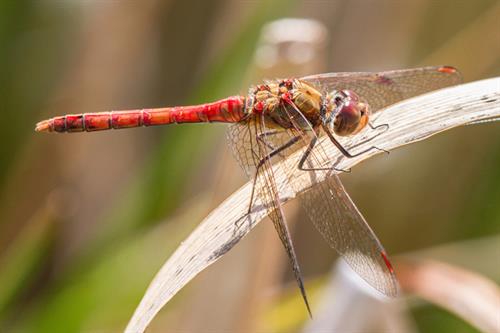 There are three stages in the life-cycle of all Dragonflies. The egg hatches into the larva (also known as a nymph), which moults up to 18 times before emerging as an adult. Unlike other more recently evolved insects, there is no pupal stage.

After the eggs have been laid, some hatch within 2-5 weeks and others laid late in the year enter a diapause (like hibernation) over winter. Dragonflies live underwater as larvae for between 3 months and 5 years. During this time they will undergo between 8 and 18 moults to grow.

Both larval and adult dragonflies are ferocious, opportunistic predators. As larvae their prey includes insect larvae, crustaceans, worms, snails, leeches, tadpoles and small fish. Different species of larvae adopt different hunting strategies; some will actively hunt prey and are usually coloured to be camouflaged in aquatic plants, while others are ambush hunters, and are darker allowing them to be camouflaged in the mud and detritus where they hide waiting for prey to pass.

Once they are fully grown and weather conditions are suitable, larvae will emerge as adult dragonflies or damselflies. In the UK this occurs between April and September, depending on species. Emergence is a risky process. Adverse weather conditions can result in failed emergence and the dragonfly dying - a newly emerged dragonfly is very vulnerable to predation until it becomes fully active. When it is ready to emerge, the larva chooses a suitable support to climb up - this may be an emergent plant stem, rock or pond liner. The larval skin splits creating a hole in the back (thorax) and the dragonfly hauls its head and thorax out of this hole. It needs to wait for its legs to harden before pulling itself fully out of the larval skin (exuvia). The newly emerged dragonfly will then hold on to the empty larval skin or plant stem while it pumps up its abdomen (body) and wings by redistributing its body fluid. The dragonfly then waits for its wings to harden sufficiently for it to fly.

Initially the adult will live away from water bodies as it fully develops its colours and becomes sexually mature. This takes around a week, andit will spend this time feeding. Adult dragonflies eat a wide variety of insect prey including mosquitoes, midges and flies, but they will also eat larger prey such as butterflies and other dragonflies and damselflies.

On maturing, males will return to water bodies where most species are territorial and defend areas of suitable breeding habitat. Females will only return to the water bodies when they are ready to mate, to avoid being harassed by males. Before they mate, males need to transfer their sperm from segment nine of the abdomen to secondary genitalia below their 2nd abdominal segment; this is usually done after grabbing a female, but can be before. Male dragonflies use their tail (anal) appendages to grasp females; in dragonflies (Anisoptera), the males grasp round the female’s eyes, but in damselflies, males grasp round the female’s neck. Once the male has grasped the female, they are ‘in tandem’, and can fly quite well joined together, If she wants to mate, the female will bring the end of her abdomen up to the male’s secondary genitalia for sperm transfer, creating a ‘heart’ shape - this is the copulatory position, also known as the “wheel”. After mating, the female will lay her eggs and the life cycle starts again. In the UK most of the life cycle is spent as larvae underwater; adult dragonflies can live for up to 8 weeks, but on average in Britain they live only 1 – 2 weeks. 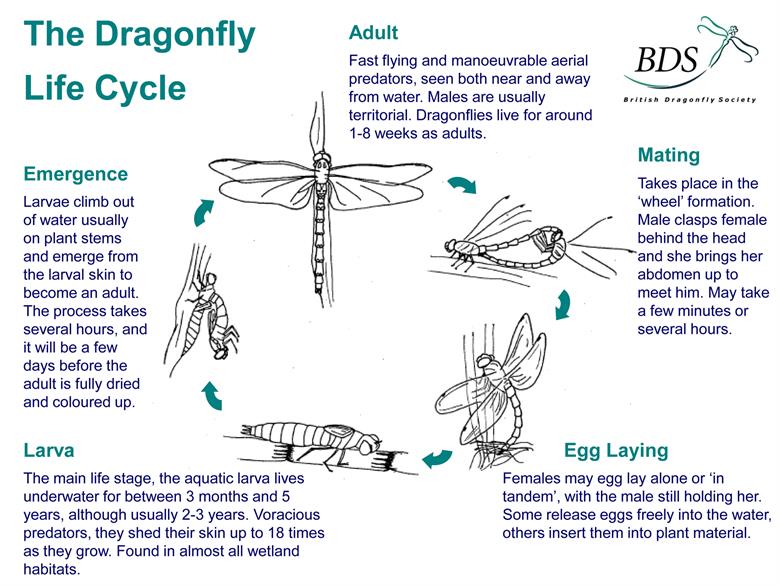