The priority habitat in urban settings is referred to as Open Mosaic Habitat on Previously Developed Land (OMH). OMH occurs on sites that have been previously developed or within which the ground has been disturbed. It is characterised by a patchy appearance with some vegetation and varying amounts of bare ground. It is concentrated in urban and former industrial landscapes, but also occurs outside of these areas in quarries, railway sidings, etc. It is threatened by destruction and degradation due to redevelopment, conversion to landfill, eutrophication, inappropriate management or 'restoration' and natural succession. Few OMH sites are protected as SSSIs or nature reserves.

This habitat maintains populations of nationally scarce invertebrates and lower plants. Importantly, it offers opportunities to study ecological succession which are extremely rare in the Welsh countryside, and it also gives many city and town dwellers their first chance to experience nature at first hand 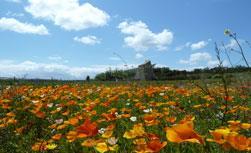 The WBP Urban & Brownfield Group has identified priority areas for targeted conservation effort in selected areas of Wales and is currently working up the additional areas. Due to the dynamic nature of brownfield sites please inform Pete Frost if there are any modifications to the site boundaries outlined in the maps. The maps for each local authority area are also available as a GIS layer. Full coverage of OMH habitats across Wales in all local authorities is the next step, please send any updates you have to Pete Frost.