Lowland raised bog is a specialised habitat of elevated deposits of raised peat and is generally an acidic and nutrient-poor environment. Raised bogs are usually fed by rainwater and are typically found in topographical depressions in cool, wet regions. Lowland fen typically build up on peat, peaty or mineral soils that are permanently or periodically waterlogged. Fens are fed by groundwater and surface run-off and consequently support many species of plants. 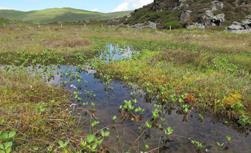 The WBP Wetlands Group has identified priority areas for targeted conservation effort in Wales which are listed below. The area maps are also available in GIS format. Use the contact us to request the files.

The Wetlands Group draws its membership from a range of statutory, local authority and wildlife charities and is chaired by Peter Jones, Natural Resources Wales.

Do you have a question relating to the work of this group? contact us 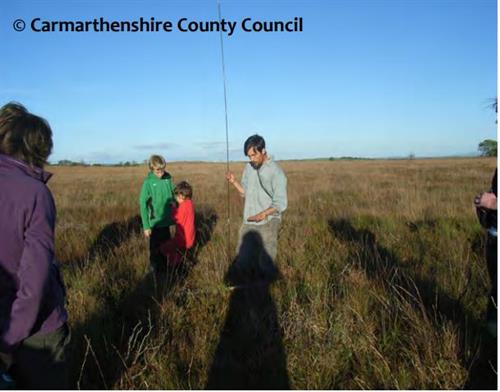 Carmarthenshire Bogs – exploring their past, celebrating the present and conserving the future

A partnership led by Carmarthenshire County Council has been successful in receiving a grant of £43,000 from the Heritage Lottery Fund (HLF).

The project, also supported with funding from Natural Resources Wales and Carmarthenshire County Council, will seek to explore the history of the bogs, celebrate the special bog habitats and species, and take action to conserve these important habitats for the future.

There are five sites included within the project. They all consist, in the main, of lowland bogs, heathland and marshy grassland habitats on Section 45 common land, i.e. common land for which there is no known owner. The sites appear to be little known to local communities but have a considerable biodiversity, landscape and cultural heritage value. These bogs lie within an area that has been identified by Natural Resources Wales as a wetland priority area for lowland bogs in Wales.

The project will run until December 2016 and will:

For further details on the project please contact Isabel Macho